As a college student who’s already studied abroad once — in London during the fall of 2014 — I didn’t think that my second semester abroad in Italy would be much different. I assumed that there would be a lot of gelato and pizza with a few weekend trips to different European destinations. I didn’t have high hopes for meeting an Italian lover. In fact, I swore up and down to my friends that I would not be searching for romance because it would inevitably end in separation and heartbreak for one or both of us.

Ironic, then, that I ended up falling for a girl I met on my program. A fellow American student, she lives in Colorado and goes to the University of Colorado while I live in Pennsylvania. I knew how difficult long distance could be from experience — I’d been in a long-distance relationship during my first semester abroad and found it frustrating and difficult. I could never find time to talk to my boyfriend when my roommates weren’t home or hogging the Wi-Fi, which made communication very difficult. I didn’t want to repeat this again, especially not in any long-term way.

At first, after we admitted our feelings to each other, I denied the possibility of having a relationship, insisting that if we got together, then we’d have to break up at the end of the semester. I pushed her away because I was scared of doing long distance. I didn’t want us to have to drift slowly apart or to suffer from the distance between us for the rest of college.

In addition to being against long-distance, I was also worried about the fact that it could never work out because we hadn’t known each other for long before we had to live far apart. By the end of the semester, we would have only been dating two months. How could anyone’s long-distance relationship survive on such a shaky foundation?

All of these things seemed perfectly logical in my head, but then — and I’m about to wax poetic here, so if you gag at chick-flick moments, then you’d better skip to the next paragraph — I fell in love anyway. We all know that love trumps logic every time, and as I spent more time with her, I found that I couldn’t help but love her. She seemed perfect for me in every way, the person I didn’t even know I was looking for. And as the end of the semester loomed closer, I wondered how it was that I could throw away this romance. We already had so many good memories together: drinking wine in Florence, hiking in the Amalfi Coast, having sex for the first time in Cinque Terre. We fell in love in some of the most beautiful corners of the world, and letting that go in fear of what was to come next seemed cowardly to me. 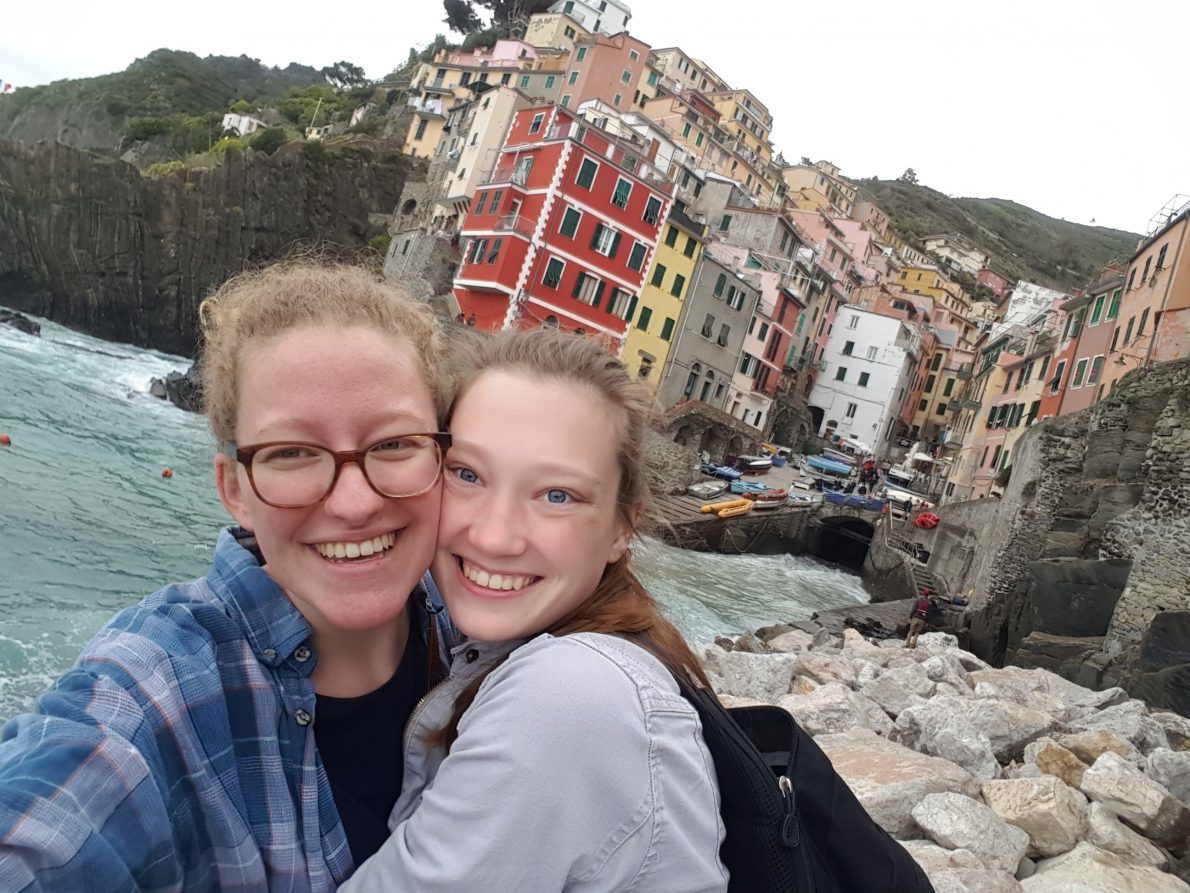 Helen and her long-distance love at one of the towns of Cinque Terre, Italy.

So we had the “what are we, what do we want to be” discussion and decided, ultimately, that there was nothing we could do. We were already dating. We might as well slap a label on it and see if it stuck. I started to call her my girlfriend, and she did the same. It felt good. We’d fallen together naturally, and we both hated the idea of breaking up now more than we hated the idea of being far apart.

I tried to think of all the problems that I had while doing long distance with my ex. Communication was bad and infrequent, mostly because of the Wi-Fi. The sexting felt forced and annoying. It was difficult to find privacy to talk to him about anything more serious than my breakfast plans for the next day and my pile of homework. I told my girlfriend about all of these problems, and we decided what would work best for us. We worked out a system where I’d visit her over the summer, and she’d visit me over Christmas. We decided that Skyping every day would be excessive but only once a week wouldn’t be enough. She agreed with me on the sexting front (Disclaimer: Sexting is cool and can be fun as an every-now-and-then thing, but with my ex, I’d found that we could go for days and barely speak to each other beyond the sexting).

My solace was that things would be easier with both of us in the states. We’d both have data plans and be able to make phone calls. We would have reliable Wi-Fi. There would be no ridiculous time difference — two hours barely makes a difference at all. Even though I was terrified leading up to the end of the semester — and there were quite a few times we both ended up lying in bed crying about our upcoming forced separation — all in all, it hasn’t been too bad. 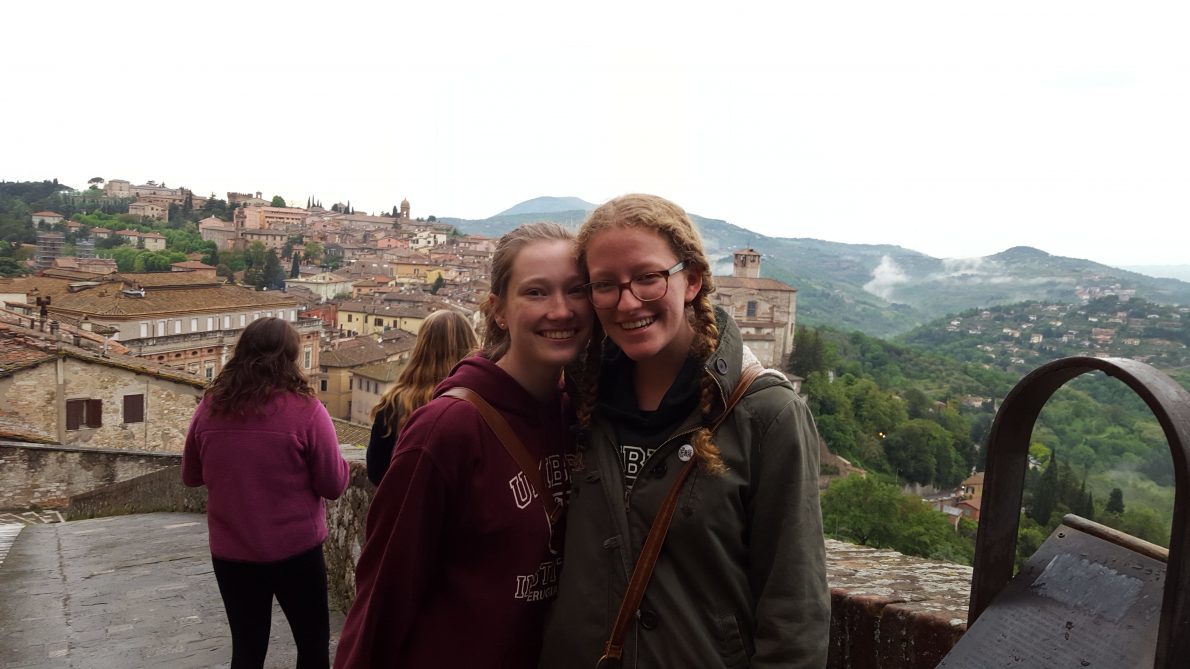 Helen and her significant other on their last night in Perugia, the town where they were studying.

I was traveling for two weeks after the semester ended, so while I was still in Italy with sketchy Wi-Fi, things were rough. We couldn’t really talk on the phone, and pictures would barely send. But as soon as I got back to the states, things became a world better. We have long phone calls every few days and short ones in between. Just a quick ‘calling to check in and hear your voice’ can go such a long way.

Not long after she left Italy, while I was still there, she booked a flight to Pennsylvania for the two weeks around Memorial Day Weekend so she could go to the shore with me and my family. I’m planning on heading out to visit her in a month or so, too.

It’s the little things that keep it afloat, though: the good morning texts, the “how is your day going?” messages, the silly Snapchats. We’ve had Netflix dates using the website rabb.it that lets you stream movies together. We discovered an app called Couple that lets you send doodles back and forth, pictures (some of which you can set to self-destruct at a certain point), update lists together (such as places to go and our favorite memories), and more.

It was important to talk about our fears openly, rather than stoically pretend that we had no concerns. Now that we know our concerns, I can do what I can to make sure she’s comfortable and happy — and vice versa.

All in all, I’m so relieved that I didn’t let my fear get in the way of having a beautiful relationship. Even though we’re far apart, we’re still growing together and finding new ways to love each other.

If you are unsure of your LDR, here are some things to know before you enter into a long distrance relationship.

How about you? Were you scared going into your LDR? What kinds of things did you talk about before deciding to do it?

How to End a Long-distance Relationship